In Turku With a Camera

HOW DO PEOPLE GO ABOUT CHOOSING A TRAVEL DESTINATION? TO YOUR  GRAN’S SURPRISE, THE TOP CRITERION IS  THE INSTAGRAMMABILITY. THEREFORE, HERE WE PRESENT 22 VISUALS WHERE THE AESTHETICS SHOW UP WELL IN PIXEL FORM.

The River Aura is Turku’s lifeline to the sea. Flowing through time, home to the riverboats, a national landscape, and the Turku Tiber. Here are a few tips on where to find the most beautiful spots. 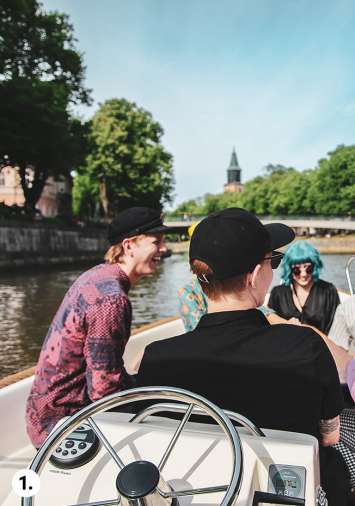 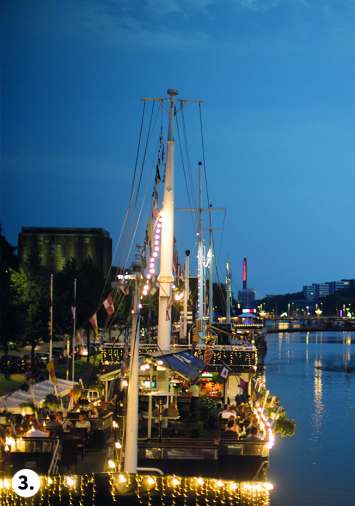 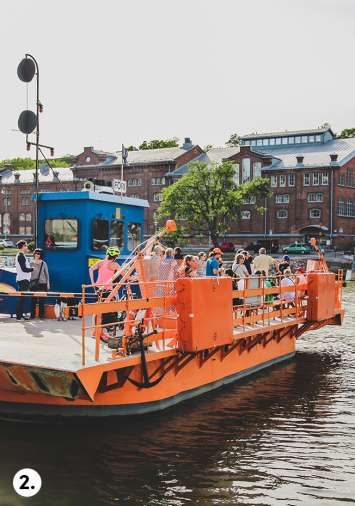 1. Låna Boats
Hire an idyllic electric boat from the shore of Vähätori Square and enjoy some tasty camera angles from the river perspective. Smile – there’s no more central spot in Turku. lanaturku.fi

2. Föri
What’s orange, loved by the locals and rocks from shore to shore of the river? The answer: the over 100-year-old Föri ferry. If rickety authenticity is your thing, then head here and treat yourself to a free 4-minute River Aura cruise.

4. Library Bridge​​​​​​​
The moment there’s a whisper of beautiful light, you’ll find a passionate photographer setting their tripod at the foot of the library bridge. Come to see and you’ll understand why.

Just a stone's throw from the Cathedral Bridge is a place known as Tervatori on Google Maps. The Lönnrotintie path briefly passes the water’s edge on a wooden walkway. On the opposite shore you can see the verdant banks, old houses and the serene tower of Turku Cathedral. Indigenous people of the 19th century believed a camera captured the soul. Well, it’s quite possible the soul of Turku is exposed for all at this very spot.

Ruissalo is beautiful place to visit whenever you're in Turku. Famous for the Ruisrock music festival, other photographic attractions are hiding there, like the old villas in the Kansanpuisto Park, where the colours of the wooden architecture are straight from the menu of an old-fashioned ice cream parlour.

Many of the villas have their own private bathing huts on the beach. One hundred years ago, swimmers didn’t jump straight from the pier to the sea but took a more civilized approach, from a hole in the hut floor.

The history of the city of Turku dates back to the 13th century, which, from a Finnish perspective is quite something. The over 700-year-old Turku Castle and cathedral are always worth photographing but there are many more well-aged, patina-coated attractions to snap.

1. Medieval Main Street
Centuries-old, stone walled buildings lining narrow, cobblestone medieval streets. You don't always have to go to Tallinn or Stockholm - the same ‘old town’ vibe is also found in Turku. In the same place take a picture of The Old Great Square and the stage for the declaration of the Christmas Peace on the balcony of Brinkkala Mansion, at the edge of the square.

2. Stairs to Koskenniemenkatu Street
Behind the cathedral, an enchanting set of stairs leads up to the summit of Yliopistonmäki hill. Whichever direction your camera’s pointed, you’re forced to refocus for all the cultural history and academic tradition in view. 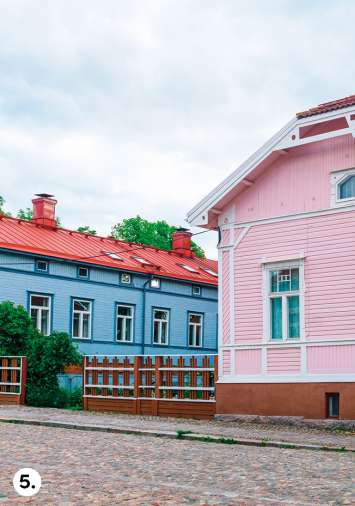 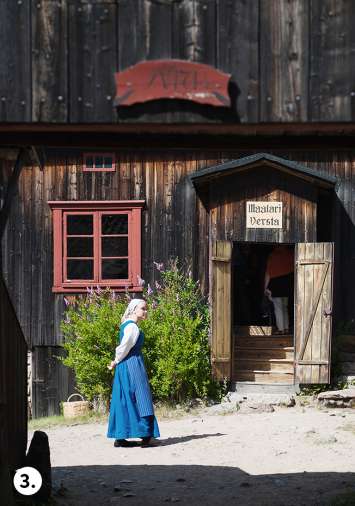 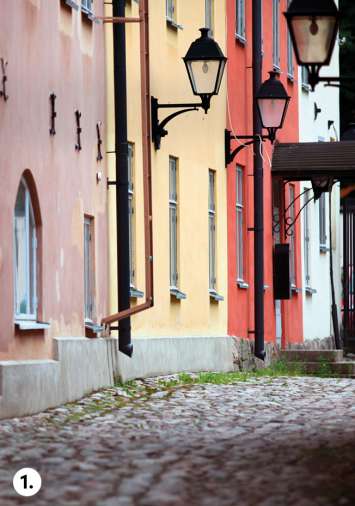 3. Luostarinmäki
The 30 buildings of this outdoor museum offer an extremely rare and unique photographic opportunity. It’s no surprise that this distinctive 19th century neighbourhood has appeared in movies, such as Mika Kaurismäki’s 2015 movie The Girl King. Turku.fi

Adorning the wall of the building at the edge of Vähätori square is the text ‘Omnia Vincit Amor 1588-1904’. In summer, the beautiful people of Turku flock to some of
the city’s best restaurants and embrace the vibrant terrace milieu. For instance, it’s worth keeping this name in mind: Restaurant Mami.
*Love conquers all

5. Port Arthur a.k.a Portsa
Is this Finland's most beautiful neighbourhood? Without question. Portsa was the first to win the Finland’s Best Neighbourhood competition in 2001. The cobblestone streets and former homes of sailors and their wives are now a thriving urban community, with the most beautiful homes and courtyards in Finland. Walk and watch but don’t stop and stare – people are still living their every day.

Walo Rooftop Bar is located on the roof of Wiklund's new department-store-hotel combo.

On the ninth and tenth floors, the rooftop bar is a must-see for both Turku residents and visitors to the city. The locals are particularly fascinated by the bird's-eye view of the new market square development.

For many, it’s a fascinating surprise looking at Turku at an angle from which the city has never been seen before. Look at the pictures from others and use the hastag yourself: #walorooftopbar

PS. Across the city you’ll find a couple of giant Kiss my Turku signs: one is on the Lönnrotinpuisto path on the shore opposite the cathedral, and the other is here at the Walo Rooftop Bar.

1. Posankka
Guarding the entrance to the student village and Caribia Spa Hotel is a bizarre yet beautiful union of pig and duck. It is the unique creation of artist Alvar Gullichsen.

2. Daisy
She loves me, she loves me not? Forum Marinum's hyper-realistic giant flower by Jani Rättyä and Antti Stöckell photgraphs superbly in pictures.

3. Star Gazing
At each corner of the Myllysilta Bridge are statutes of primitive human-like figures lounging on Turku’s river benches. The works of Kari-Petteri Kakko simply scream for a selfie.

4. A Meeting in Turku 1812
Pose with the Russian Tzar and the Crown Prince of Sweden. The statue by Andrei Kovaltshuk found at the end of the Library Bridge looks very traditional but was actually made in 2012.

Feast for the Eyes x 6

In recent years, Turku as a culinary city has risen to a whole new level. The locals prefer to enjoy their food by eating it but they will let you get away with snapping a few pictures as well – just don’t let it get cold. So, where to go to spot beautiful coffees, drinks and dishes?

1. Café Qwensel
In the 1700’s, it was a pan of coffee rather than a luxurious latte. One of Turku's best-kept secrets is the café found at the Pharmacy Museum. This spot can be found in the centre of the city, right along the riverside. cafeqwensel.fi

2. Tiirikkala Café Bar
Fun fact, this is Turku's most photographed woodshed. The beautifully popular Tiirikkala serves from the former premises of an Artek shop and nobleman's wood
store. A tip from those in the know: try the Sunday brunch. tiirikkala.fi 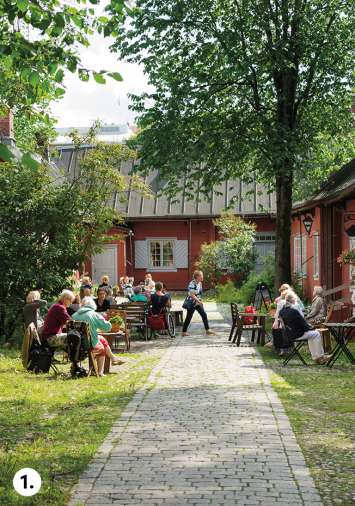 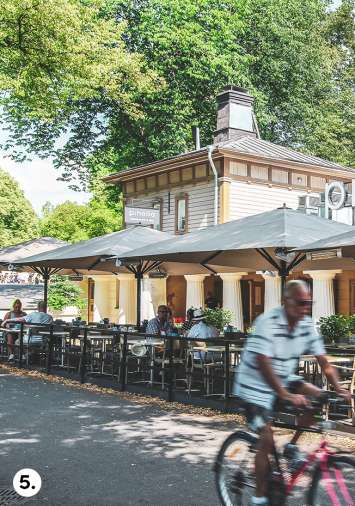 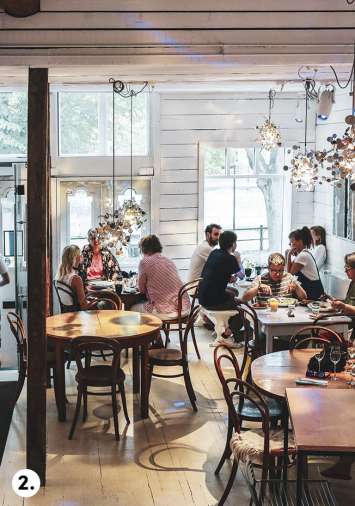 3. Turku Market Hall
Come and see if you can capture with your camera a slice of Turku’s culinary soul. The hall building, dating from 1896, provides a setting for Turku’s merchants to concoct their wares within. kauppahalli.fi

4. Kakolanruusu
A relaxed yet refined restaurant on Kakolanmäki hill, where only at the turn of the millennium people were still serving time not food. This well-decorated restaurant is located in the impenetrable milieu of the old prison. Arrive up the hill in style aboard Turku’s new ‘Funi’ funicular. kakolanruusu.fi

5. Pinella
This might be Finland's oldest restaurant but it’s no museum of food. The Puupinella side exudes the best of this bright and venerable building. Beautiful dishes, fabulous drinks and the most majestic columns in Turku. pinella.fi

Turku's most instagrammatic spot is, of course, on the riverside, where Café Art, known for having the city’s best baristas, remains a prized possession of Turku’s café culture. The riverside terrace has all you need to be an Insta-primo, with pastel-coloured stone buildings, the rays of light streaming between ancient trees and a beautiful pattern on the foam of your latte.

Café Art is a genuine art café, with temporary exhibitions on display. In addition to enjoying a splash of paint, or if you prefer, you can pick up a packet of the house’s own Turku Coffee Roastery to take home. cafeart.fi

Five tips for sustainable tourists in the Turku region

On the water in Turku x 3

Things to do with kids in Turku x 7

The most delicious tip for the winter season – Turku Food Walk

The Finnish Archipelago – the most numerous in the world