The Turku region cycling route No.4 – a Tour to Kakskerta

Jump on your bike and enjoy the archipelago atmosphere, beautiful nature and the peace of the countryside. There are also interesting sights along the route across the three islands.

Difficulty level: Moderate. The route includes hills. If you need some assistance going up the hills, an electric bike is a great solution.

Hirvensalo, Satava and Kakskerta are islands south of Turku and together form the Hirvensalo-Kakskerta district, which is the fastest growing area in the city of Turku. Kakskerta was formerly an independent municipality.

From the banks of the River Aura, you first pedal to the bridge leading to Hirvensalo, where you can already feel the seaside milieu. From the bridge, the route takes you past the ski centre to the right, the shops of Moikoinen to the left, then continuing on straight through the island. On the way, you can take a short detour to admire St. Henry's Art Chapel, which has received international acclaim for its architecture, or to observe the many different bird species and delightful landscapes that can be enjoyed from the Friskalanlahti bird tower. If you need to get something from a shop, your last chance is at the Haarla roundabout.

Also check out the Hirvensalo tour!

The bridge from Hirvensalo to Satava offers wide and magnificent views of the sea in both east and west directions. After the bridge, Ekvalla beach is on the left. The popular beach is easy to peddle to on a bike, with the distance from the city centre only about 10 km. On the fully accessible beach, you’ll find changing rooms, showers, playground, gym equipment and a kiosk, as well as a wheelchair ramp to the sea. So great, it’s easy to stay the whole day long.

From the beach, the route continues along the bike path. Shortly after the Satava-Kakskerta fire station, you arrive at the Croft Museum. This log building is the old main building of the Salmela farm from the end of the 1700’s. After leaving the croft, you cross the Höyttinen bridge to Kakskerta.

After a brisk descent, there is a slightly longer hill in front. You may find your heart rate rise a little. When you reach the top, there’s a junction where the little ‘2X’ work of art indicates which island you’re on (if it went unnoticed as you raced along). At the junction, turn left. The route takes a 15 km loop around Kakskerta Lake which stretches across the middle of the island. Whichever direction you choose, you’ll enjoy both sea and lakeside scenery. 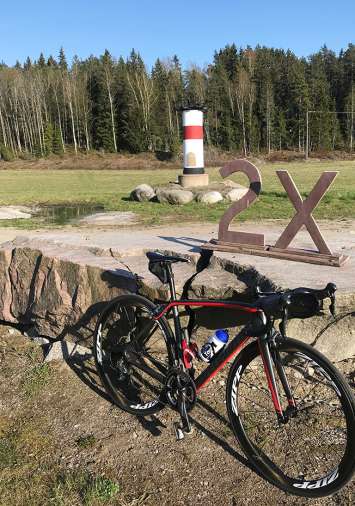 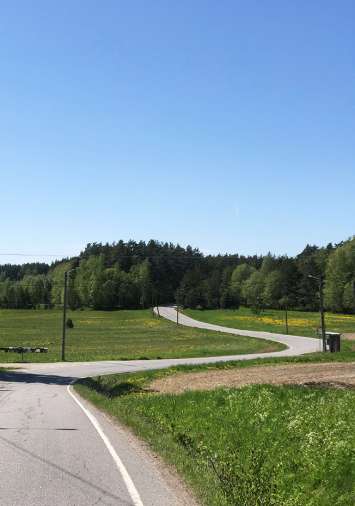 The bike path follows the Brinkhallintie Road all the way to Harjattula. Less than three kilometres from the 2X junction, you will reach Kakskerta Church. Inaugurated in 1769, the stone church occupies a lovely location on the headland, right by the sea. In the cemetery, right next to the church, is a neoclassical burial chapel of the Bonsdorff family who owned Brinkhall Manor. Stop at the church pier to admire the archipelago scenery and listen to the lapping of the water. Can you spot the small boat harbour you passed on the opposite shore? It’s only 500 metres away across the water. Journeys in archipelago aren’t always straightforward, but that’s part of the charm of island tourism!

When you leave the church, there’s an almost vertical climb but don’t be scared, it’s very short. After the hill, the bike path returns to the Kakskerrantie Road and after a short while you’ll arrive at Brinkhall Manor.

The history of the Brinkhall farm goes back to the 16th century. The current neoclassical main building dates back to 1793. The manor is the most significant cultural heritage site in the area and, with its courtyard buildings and apple orchards, forms a magnificent, picturesque ensemble. No wonder the manor has been a popular location for both wedding photography and larger productions. For many, it is familiar from the Hovimäki TV series and the film Käsky. During the summer, the manor hosts sightseeing tours, music performances and art exhibitions. There is a café in the courtyard building during summer. During your ride, pop in here to rest your tired legs and enjoy the treats available in the café as well as the charming and historic milieu. There are also accommodation possibilities in the close vicinity.

Almost directly opposite the manor on the other side of Kakskerrantie is Brinkhall Beach. The shallow, sheltered and quiet beach is a great place to take a dip in Kakskerta Lake. You can also come here by bus as the stop is right next door. In addition, there is a changing room and a toilet by the beach.

At the Harjattula golf course, the bike path ends. However, it’s a relaxed journey at the edge of the quiet road.

The section from Harjattula through Myllykylä is one of the most delightful on the route. The road winds and meanders through a beautiful rural landscape in such a charming way that there’s never a dull moment. However, in the midst of all the admiration, remember to look in front of you, as the road can be in poor condition in places. The bumpy terrain offers a nice little challenge for the more experienced cyclist as well. After all, these landscapes have also hosted the Finnish Road Cycling Championships.

After completing your loop of the lake, you return along the same route. If there is still enough enthusiasm and energy, you can turn off at the Haarla roundabout and add in a loop around Hirvensalo before returning to the shores of the River Aura. After the tour, sit back and deservedly enjoy one of the many restaurants or cafés along the River Aura.

Tip: The Kakskerta tour is a good basic length for an active person. Adding in the Hirvensalo loop, the total distance rises to about 50 km. Extra distance (approx. 13 km) can be added be deviating in the centre of Satava towards the area of Erikvalla.